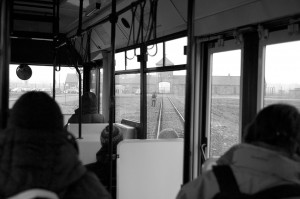 Shuttle Bus, Auschwitz II – Birkenau, Poland. In October 1941, a year after Auschwitz I was established, Birkenau was built as part of the solution to the ‘Jewish problem’. The train tracks led right up to the entrance or so called ‘death gate’, after which the people were separated into those who were fit or unfit to work.