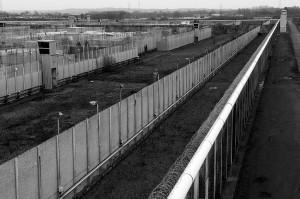 Long Kesh Prison (HMP Maze), County Antrim, Northern Ireland. The prison is known colloquially as The H Blocks, Long Kesh or The Maze. The prison and its inmates have played a prominent role in recent Irish history, notably the Blanket Protest and in 1981, the hunger strikes in which 10 men died. The prison was closed in 2000.