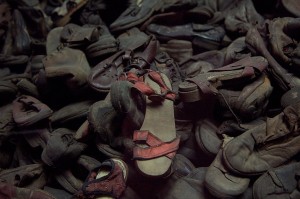 Shoes, Auschwitz I, Poland. Most of the Jews deported to Auschwitz were convinced they were to be ‘resettled’. Prisoners were told to tie their shoes together to ensure they would get them back as a pair. The SS had no intention to return them. Instead they were to be re-distributed back to Germany.